Ambika Devi speaks on Happiness and the Power of Intuition as a path to well-being at the 12th Conference of Spirituality in Ayurveda and Healing.

Posted by Ambika Devi at 9:48 AM No comments: 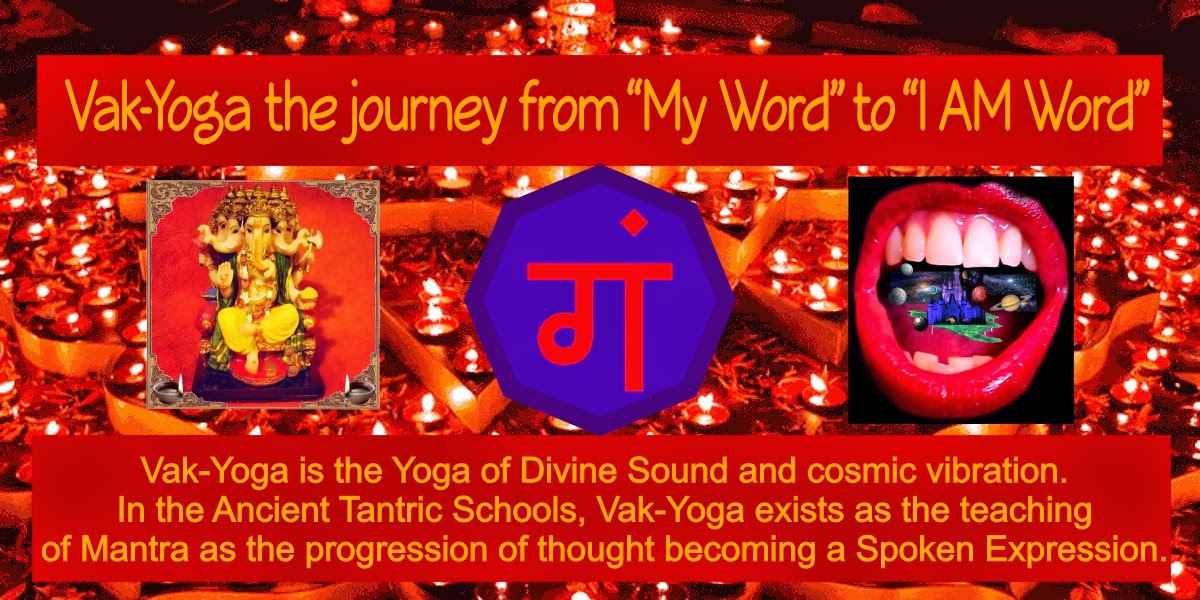 Vak-Yoga is the Yoga of Divine Sound and cosmic vibration. In the Ancient Tantric Schools, Vak-Yoga exists as the teaching of Mantra, as the progression of thought becoming a Spoken Expression. The practice of Vak-Yoga to energizes all subtle layers of the body, mind and spirit with the sound of speech.

These techniques must be taught live and follow the unique doctrine of Gurukula. Vak-Yoga teachings and cannot be duplicated by listening to a recording or watching a video.

The outcome and effect of Vak-Yoga is the full-bodily-felt-sensation of being in the moment and completely connected with others and the world around you. Ambika Devi is an insightful and loving teacher and counselor, an Alternative Life Coach and group training educator. Her current doctoral work with Yoga-Samskrutham University encompasses research on the topic of Vak-Yoga. This ancient mystery teaching is the expressed property of Dr. B.V.K Sastry and Yoga Samskrutham-University to whom Ambika Devi is appointed assistant and presenter.
Posted by Ambika Devi at 3:55 PM 1 comment: 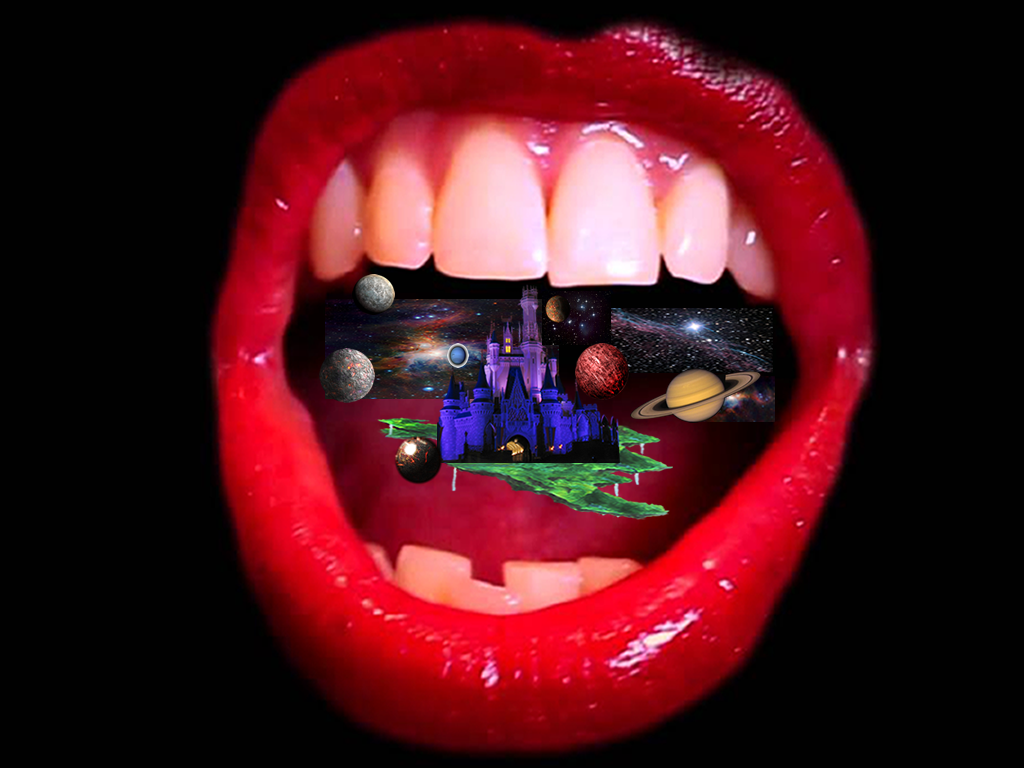 The perception of Science comes from the word: वेद् Veda. The seed concept of this comes from विद् vid, the word for knowledge, experience and awareness. From this comes the word वेदस् Vedas. Vedas are the secrets of the cosmos realized as sound—energy vibrations in a state of higher consciousness.
Vedas possess energy vibrations of higher consciousness. These are coded vibrations in the form of language. The application of वेद for improving the quality of life is called: विद्या vidya. What one gains from absorbing the information of the Vedas depends upon what quality aspect of life is pursued; philosophy, magical skills, science, incantation, health remedies, scholarship and the secret language of plants.
We embark on your journey of the application of knowledge for the improvement of the quality of life in वाक् योग Vak-Yoga seminars and practice. I guide you to begin an exploration using your own voice for inner-magic of mind-body-spirit combined healing.
Body healing is experienced as a deep-felt sense of relaxation. This in turn brings deeper rest and helps the physiology reset to a balanced, harmonious state. Mind-healing is experienced as core-calming and frees you from thought stressors. This moves you away from the thinking-mind and the states of processing and doing—into the stillness and the state of feeling and being.
The practice of वाक् योग Vak-Yoga is the ancient Yoga Mystery School teaching, a tradition from पतञ्जलि Patanjali. This is also called संस्कृतं Samskrutham, more popularly known as Sanskrit—the language of vedic records. This is an awakening or realization that the voice is a divine tool of transformation. The practice of वाक् योग Vak-Yoga is vastly different from कीर्तन Kirtana which uses the voice for saying, repeating and celebrating chants of the many names representing aspects of the Divine. Kirtana is a devotion-practice of भक्ति Bhakti which focuses on trust and faith and maintains the devotee and God in a separated state of relationship—duality, attachment and division.
वाक् योग Vak-Yoga is the path of illumination that leads you directly to the Divine resonating in you and through you in the form of your own voice!

Join the next seminar in Jupiter Florida:
https://www.facebook.com/events/1467410246804555/
Create a seminar at your location-engage me.
‪#‎yogaforhealth‬ ‪#‎Yoga‬ ‪#‎Meditation‬ ‪#‎meditationtechniques‬ ‪#‎meditationbenefits‬ ‪#‎Vak‬-Yoga ‪#‎AmbikaDeviMA‬ @AmbikaDeviMA
As we embark on your journey with the sacred plant of the Grandfather, I am guiding you to use your voice for magic and healing. This moves you away from your mind and the states of thinking and doing—into the stillness and state of feeling and being.
The practice of वाक् योग Vak-Yoga is the ancient mystery school teaching. This is waking your up to realize the voice is a divine tool of transformation. This practice is vastly different from कीर्तन Kirtana which is saying, repeating and celebrating and भक्ति Bhakti that is devotion, trust and faith but also attachment and division.
वाक् योग Vak-Yoga is the path of illumination that leads you directly to the Divine Power in you!
Posted by Ambika Devi at 10:08 AM 1 comment: 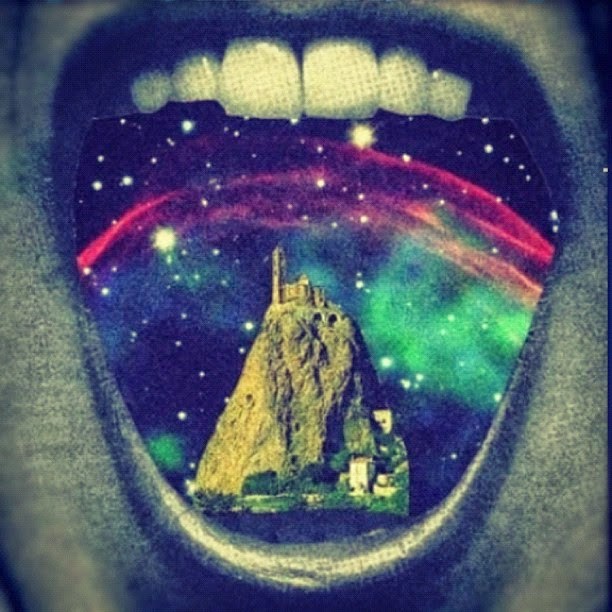 All sounds uttered by lips are prayers! It is not so much about taking care in what you "wish for" as it is to have integrity in all sounds formed. The matrix of reality is created by the architect of thought—this is where the seeds are planted in the fertile ground of existence. The resonance of the voice infuses and fertilizes these thoughts, growing them into existence. This is the marvelous power of human sound—it is our divine connection as co-creator. We must utilize integrity of speech and sound. We must be mindful of our words. This is the power of Vak-Yoga. Come to visit me for lessons in this powerful meditation practice and learn to rid the energy field of stress as you use the sound of your voice to inspire magical healing and deep-trance-state meditation. 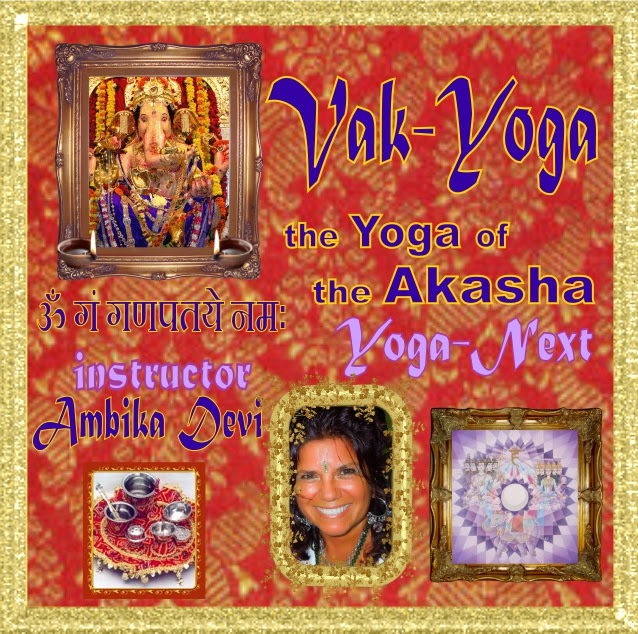 The power of our words and speech form our reality. We have learned how to spend energy by speaking and now with the practice of Vak-Yoga, we have a powerful tool to energize ourselves by the use of the voice.

Stress is created internally by the thought patterns which express outwardly as speech. Vak-Yoga is a potent tool by which we can generate and regenerate positive energy through our communication and related sounds. Vak-Yoga addresses the body-mind as an integral layer that wraps over the inner spirit. It honors the energetic aspects of our being, rather than viewing the physical body as a processing machine of mere matter and an assemblage of chemistry.

Vak-Yoga is the Yoga of the speech process which originates in the Vishuddha Chakra, the throat center. It is the experiential journey of tracing the origin of “My Word” to a point of becoming “I Am the Word.” This practice of Vak-Yoga is an exploration of the natural human process by which a thought becomes a spoken expression.

By combining the breath with the voice in harmony in this unique technique of meditation, the practitioner reaches a profound deep trance state. From the beginning of experiencing the Vak-Yoga technique, one is able to identify and explore a deeper state of consciousness.
Our compassionate individualized guidance for the precision of sound, gives the optimum experience of the mind stilling effect of Vak-Yoga. The outcome and influence is the full bodily felt sensation of being in the moment and completely connected with others.

Posted by Ambika Devi at 8:03 AM No comments: